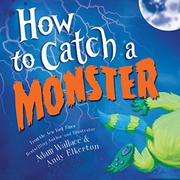 HOW TO CATCH A MONSTER

From the How To Catch… series

When a kid gets the part of the ninja master in the school play, it finally seems to be the right time to tackle the closet monster.

“I spot my monster right away. / He’s practicing his ROAR. / He almost scares me half to death, / but I won’t be scared anymore!” The monster is a large, fluffy poison-green beast with blue hands and feet and face and a fluffy blue-and-green–striped tail. The kid employs a “bag of tricks” to try to catch the monster: in it are a giant wind-up shark, two cans of silly string, and an elaborate cage-and-robot trap. This last works, but with an unexpected result: the monster looks sad. Turns out he was only scaring the boy to wake him up so they could be friends. The monster greets the boy in the usual monster way: he “rips a massive FART!!” that smells like strawberries and lime, and then they go to the monster’s house to meet his parents and play. The final two spreads show the duo getting ready for bed, which is a rather anticlimactic end to what has otherwise been a rambunctious tale. Elkerton’s bright illustrations have a TV-cartoon aesthetic, and his playful beast is never scary. The narrator is depicted with black eyes and hair and pale skin. Wallace’s limping verses are uninspired at best, and the scansion and meter are frequently off.

Only for dedicated fans of the series.