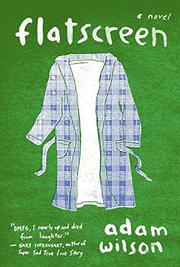 A frequently funny subversion of the coming-of-age story, though there’s a pervasive sadness underlying the comic.

This promising debut novel sustains itself through the strength of its voice—the first-person narration of Eli Schwartz and the distinctive voice of author Wilson. A pudgy, jobless, stay-at-home 20-year-old with a passion for cooking and an ambivalence toward sex, Eli describes himself as “a glorified townie without the glory. No rugged good looks or blue-collar gas-station-employee pride. No fading memory of a football career. No greaser girlfriend, legs thick and strong like the twin pistons on my (nonexistent) restored Camaro.” Eli might easily be described as a loser and a stoner, but the novel seduces the reader into identifying with him, caring about him, rather than treating him (as some others do) as an object of ridicule. “I’m a good soul who’s gone a bit off the deep end,” he explains. His well-to-do father left his mother for a second marriage and family and took his standard of living with him. His older brother left for college, keeping Eli in a claustrophobic relationship with the mother who encourages it (at least until she also discovers life beyond Eli and threatens to leave as well). The plot’s pivotal encounter involves Seymour Kahn, a veteran actor whose roles have diminished because he's in a wheelchair but whose sexual appetite remains omnivorous. Kahn enters Eli’s life as a surrogate father, potential lover, sexual procurer and/or drug buddy, after he becomes interested in buying the family home that Eli’s mother needs to sell. The repressed, apathetic Eli and the profane, uninhibited Kahn make for an odd couple, though Eli acknowledges, “I’m afraid of becoming Kahn, but part of me knows I’m already Kahn, that he’s the part of me I want to keep away from the world. I think Kahn might be in love with me.” Though the voice is strong and the characters indelible, the author rejects the resolution of a typical rite of passage. Instead, it doesn’t offer much resolution at all (except for Kahn), as Eli conjures 20 possible endings, committing to none.

A book with lots of laughs that's also very bleak.