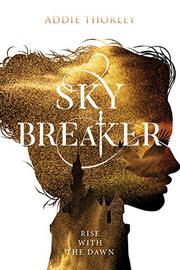 From the Night Spinner series, volume 2

On the heels of Night Spinner (2020), Enebish leads a ragtag band against the Sky King while Ghoa’s beliefs are challenged.

Although Night Spinner Enebish and newly awakened Sun Stoker Serik successfully led the desperate shepherds to Verdenet, finding the hiding king is far more difficult. Enebish’s psychological wounds from being betrayed in the past are still raw, resulting in behaviors that don’t do her any favors when dealing with her increasingly reluctant followers. In Ghoa’s parallel narration, she is forced to reckon with her own feelings of being betrayed, especially as Zemya’s trap springs into action and she takes the brunt of it. Enebish seeks out logical allies while Ghoa strikes an odd partnership, all the while keeping her eye on the prize. Uniting both storylines is the common enemy—Kartok—and the reveal of the full extent of his scheme. Their stories are gracefully balanced, enabling readers to explore more of the lavishly painted worldbuilding and internal mythologies. Characters’ past hurts inform their present decisions, good and bad, creating tension in relation to decisions of trust and forgiveness. The geopolitical situation blends well with the cultural. Ethnicity follows national lines, with Zemyans being very pale and blond; Verdenese like Enebish dark-haired with golden skin; and Ashkarians like Ghoa and her cousin, Serik (Enebish’s love interest in a sweetly romantic subplot), falling in between, with tanned skin and freckles. The conclusion thoroughly wraps up the duology.