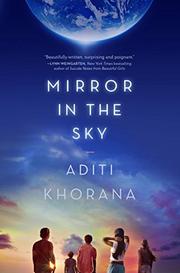 MIRROR IN THE SKY

New friends and the discovery of a new planet cause one teen to question her life on Earth—and beyond.

With her best (and only) friend spending a year abroad, Tara faces her junior year of high school as a loner. Even though she’s biracial Indian-American (with an Indian father and white mother) and stands out as the only person of color at her elite Greenwich, Connecticut, private school, the 16-year-old often feels invisible. But her world’s about to change when NASA receives a response to their Arecibo message and confirms a mirror planet, dubbed Terra Nova, and she’s invited to a party at popular Halle’s estate home. This quiet, thoughtful debut novel doesn’t bound with adventure, yet Tara’s internalized angst and quest for identity make the story a quick read. Beautiful language and mature, realistic adolescent situations flourish as Tara considers quantum physics and philosophical theories and whether a different or even better version of herself exists on the parallel planet. And are there other versions of the important people in her life? A mother who stays at home rather than joining a planet-worshipping cult? Another Nick, who loves her and doesn’t orbit around Halle? True friends?

Like a space explorer, Tara is thrust into the uncharted territory of life and must decide how she will navigate this new part of herself.