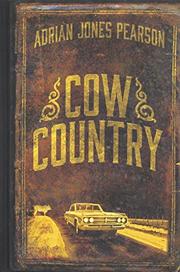 A comical novel about life at a zany community college, from debut author Pearson.

When Charlie gets the job of special projects coordinator at Cow Eye Community College, he’s not quite sure what to expect, especially after his bizarre phone interview: “Several questions concerned my relevant experience in highly divisive work environments and how I might resolve a series of hypothetical conflicts—for example, what I would do if one of my colleagues tried to sever the head of a key administrator.” Nevertheless, after a long bus ride to the town of Cow Eye Junction, Charlie is met by the man in charge, Dr. Felch. Charlie, he’s told, is replacing the last special projects coordinator, who had “countless awards and commendations. References from the Queen of England and Archduke of Canterbury” (though she turned out to be an “unmitigated disaster”). His goals seem relatively simple: ensure that the school maintains accreditation and plan the annual Christmas party. Unfortunately, those directives are anything but. The constantly feuding, eccentric faculty doesn’t help. Sam Middleton, a medieval poetry expert, is a “card-carrying institutional anarchist,” while Alan Long River, the public speaking teacher, “hadn’t spoken a word to anybody at the college—his students included—for more than twelve years.” Bureaucracy rules the school, and opportunities for conflict and adventure are many, including a team-building exercise in which new hires must castrate a calf and heated focus groups; one of the institutional researchers has “been very adamant that no educational endeavor should be attempted without first conducting a focus group or a survey of some kind.” Whether or not this mix proves humorous depends on the reader’s patience for tongue-in-cheek jokes about backwardness (“the unfamiliar voice belonged to the college’s tenured negroid’”) and adjunct professors (“We’re not allowed to refer to them by name”). Ambitious in its creation of this kooky world, the book will certainly strike a chord with readers lost in their own wacky arenas of academic bickering. Others may be bored by lengthy orientation sessions and party planning, as with the seating arrangement for the Christmas party: “We’ve also made sure to bring them together politically, economically, and ethnically. In each group there will be at least one laissez-faire capitalist and one left-leaning socialist. One centrist and one anarchist. One tenured faculty member and one who is non-tenured. One white, one Asian. A lumper and a splitter. A Catholic and a Protestant. Sikh and Hindu. Jew and jihadist. Social scientist and actual scientist. Vegetarian and anti-vegetarian.”

Goofy academic struggles for those who need a break in the faculty lounge.