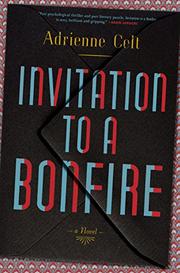 INVITATION TO A BONFIRE

Trembling with atmosphere, Celt’s (The Daughters, 2015) second novel follows a young Russian émigré as she becomes embroiled in a sinister love triangle with a brilliant novelist and his exceptional wife.

Constructed as a “collection of papers” bequeathed by one Vera Orlov to the posh girls' boarding school where her husband taught before his untimely death, the book begins with the end. Leo “Lev” Orlov was murdered in 1931, according to the opening “note on the text”; the same year, a young Donne School employee, Zoe “Zoya” Andropov, “died under hotly debated circumstances.” The story—primarily told through Zoya’s supposed diary entries and Lev’s letters—is about everything that happened before. The child of political dissidents, Zoya arrives in New Jersey on a ship of orphans and finds herself an out-of-place charity case at the Donne School, a dark outcast amid shiny American wealth. But while the other girls move on to college or marriage or secretarial jobs after graduation, Zoya stays on, tending the school’s greenhouse under the tutelage of the kindly gardener and obsessing, in her spare hours, over the otherworldly novels of the great Leo Orlov. And then, outside her greenhouse window in New Jersey, there he is: Lev Orlov. Encouraged by his beautiful, ice-cold wife—the engine of his career—he’s teaching at the school. Immediately, he and Zoya, fellow Russians with upbringings on opposite sides of a vast cultural divide—she’s a peasant, he’s the son of White Russian wealth—fall into a passionate affair. But as Zoya becomes increasingly involved with the Orlovs, she begins to understand that their relationship is darker and more tangled than she’d bargained for, and she finds herself a half-witting pawn for them both. An ominous snowball of a novel (very) loosely based on the Nabokov marriage, with a slow-burning first half and a second half that hurtles toward inevitable catastrophe, it’s a book that requires some patience, but that patience—carefully calculated—pays off in spades.