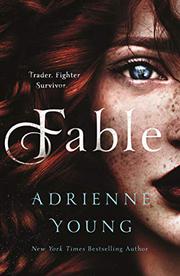 From the Fable series, volume 1

In a dark maritime fantasy, the first of a projected duology, a young woman finds home and family on a ship full of secrets.

Four years ago, 14-year-old Fable was marooned on a notorious island of thieves. Now the auburn-haired diver has managed to get onboard the Marigold to search for Saint, the father who abandoned her. But Saint is a powerful, sinister figure among the sea traders; and in the Narrows, the most important rule is to trust no one. The narrative excels in the immersive world conjured by Fable’s first-person voice, crammed with nautical lore and rich in sensory details. The cramped geography creates a grim, violent, and cruel society, and it’s no surprise that Fable is equally wary and hard. Nonetheless, her seafaring competence and touch of magic earn her a place among the Marigold’s crew. Even more compelling is her fraught, complicated relationship with Saint and the memory of her fey, charismatic mother, although the frequent flashbacks can be disorienting. More unfortunate is the uneven pacing, for the most part glacially slow—despite the frequent action-packed set pieces, nothing actually seems to happen for over 200 pages—until a rushed climax and a romance that comes from nowhere lead to a forced-feeling cliffhanger. Fable is white, and secondary characters have a range of skin tones

For readers who can’t get enough of strong female protagonists in unusual settings.