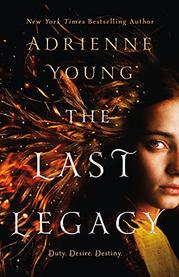 Since the moment Bryn was born, she was destined to take her place among the Roths.

Even after her parents died and she was taken to live with her great-aunt Sariah in Nimsmire, far away from the filth of the big city and the infamous Roth reputation, Bryn was destined to eventually become wrapped up in her family’s less-than-proper line of work—which was the cause of her parents’ deaths. When she returns to the city of Bastian on her 18th birthday, something she has eagerly anticipated after growing up in a small city under Sariah’s watchful eye, she is finally forced to come to terms with her identity and assume her rightful position in her family’s mysterious business. This feat would have been difficult enough on its own, for Bryn isn’t accustomed to her family members’ crude behavior, but she certainly isn’t prepared to meet the handsome, strong, brooding silversmith in her family’s employ; Ezra Finch definitely complicates things. This fast-paced tale with a Victorian feeling is filled with an abundance of scandal, high fashion, intrigue, and, of course, romance. While the large cast of characters is at times difficult to keep straight and the plot-driven prose would have benefited from more worldbuilding detail, the delightfully swoonworthy love story will keep readers engaged and the pages turning eagerly as they hurtle toward the book’s satisfying conclusion. Characters are White by default.