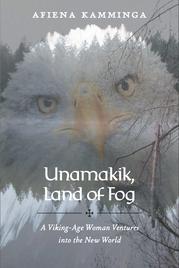 This second installment of a historical fiction series continues the saga of a Viking woman in North America.

In the late 10th century, Thora Thorvinnsdottir, a Norse settler of Greenland, finds herself stranded on the shores of Westland. Her estranged husband, Ivar Ulfson, and his crew abandoned her during an attack by the natives, leaving Thora alone with only an injured Westlander captive named Elkimu as well as two horses and a dog. Through the winter, Thora catches fish and birds to sustain them, wondering—with some chagrin—why the attractive Elkimu has not made any sexual advances. They hope to build a skin boat from seal hides in order to make it to the man’s Westland home, the island of Unamakik, before they are discovered by the Cliff Dwellers—a rival clan led by Elkimu’s disgraced uncle, Taqtaloq. The unusual pair reaches Elkimu’s island home, and his people welcome Thora into their community. After learning their ways, she formally becomes Elkimu’s wife. Thora finally has something like the life she imagined when she left her native Iceland. But when Norsemen again appear along the shores of Westland, the past returns to haunt Thora in unwanted ways. In this sequel to The Sun Road (2014), Kamminga’s prose is rich and balanced, selling not only the remote setting, but also Thora’s experiences in Westland: “Apikji, the mouse boy, was straining to pull a toboggan loaded with sap-filled containers to the steaming log cauldron by the stream. Behind him came Amu’s sons who had been checking their snares, each dangling a frozen pair of snared snowshoe hares by the hind legs.” The novel manages to work within the realm of the historical while retaining the mystical worldview of its characters and concocting a few turns that readers will not expect. The experience of seeing a re-creation of North American life around the turn of the first millennium is alone worth the price of admission, and the love story between the two unlikely spouses provides a satisfying conclusion to Thora’s difficult tale. Unlike many of the other Norse, who seek to profit from the resources of these new lands, Thora is a recognizable archetype of that more idealistic sort of migrant: the one who is simply looking for a place to belong.