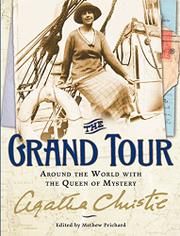 Around the World with the Queen of Mystery

A collection of the mystery writer’s 1922 British Empire Tour correspondence.

For editor Prichard, Agatha Christie’s grandson, this book is treasured memorabilia. For Christie fans, these letters and photographs will be a delightful addition to the author’s oeuvre. Essentially a marketing ploy, the tour, sponsored by the British Empire Exhibition Mission, had four goals: “to produce new sources of wealth by exploiting the raw materials of the Empire; to foster inter-Imperial trade; to open new world markets for Dominican and British products; and to encourage interaction between different cultures and people of the Empire.…” With her husband and other participants, the 32-year-old author traveled to South Africa, Australia, New Zealand, Hawaii and Canada over the course of 10 months. The letters between Christie and her mother showcase the author’s innate storytelling ability and insights on life following World War I. “From a historical point of view the account of the Grand Tour, both literary and photographic, is a remarkable snapshot of life in the 1920s, nostalgic and curious,” writes the editor. What emerges is a portrait of a spontaneous, direct woman engaged in the changing environment around her. In Honolulu, Christie surfed; in South Africa, she toured vineyards and tasted the wine; and she fell in love with New Zealand. Christie’s letters are complemented by the abundant photos.

A magical tour back to a time before telephone and instant forms of communication. Narrated by a woman who went on to become the most widely published author of all time, this volume should delight both Christie fans and history buffs.