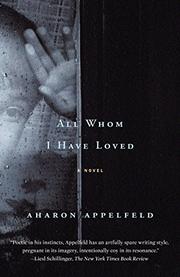 ALL WHOM I HAVE LOVED

The shadows of World War II and the Holocaust gather slowly and menacingly throughout this previously untranslated 1999 novel from the internationally celebrated Israeli author (The Iron Tracks, 1998, etc.).

Ingenuous narrator Paul Rosenfeld is a six-year-old boy living in the Ukraine in the 1930s, sometimes with his mother, Henia (a schoolteacher), sometimes with his father, Arthur, a gifted painter from whom Henia is divorced. Concentrated in the spare declarative sentences that are the author’s trademark, the novel deftly renders Paul’s growing awareness of both his mother’s need for more love than he can give her (provided now by the new husband, whom Paul bitterly resents) and the anger intensifying in his father, who is forced to abandon painting and teach high-school art, and is simultaneously appalled and energized by evidence of growing anti-Semitic prejudice. Unfortunately, the story is heavily weighted with foreshadowings that come in the form of Paul’s perceptions and disturbing dreams. The sounds of livestock being slaughtered, for example, produce a vision of “blood flowing in the sky and pouring into the horizon.” They are affecting moments, but they reveal too nakedly the author’s heavy hand. Appelfeld succeeds, however, in charting Arthur’s increasing despair, as an exhibition offers the chance to create once again—until the climate of repression awakens the violence that will consume him, just as the perilous temper of the times has claimed Henia, leaving Paul to face the future they have all feared: alone.

Artful and troubling. Still, Appelfeld has written many better books than this one.