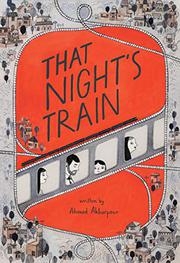 A writer’s broken promise to a motherless child frames ruminations on story crafting and the sometimes conflicting imperatives of life and art.

In a shifting patchwork of narratives and points of view, Iranian author Akbarpour (Good Night, Commander, 2010) opens with a chance meeting between 5-year-old Banafsheh and a friendly, unnamed children’s writer who promises to call in a few days. When the call never comes, Banafsheh’s delight changes to feelings of anger and betrayal that simmer even after her loving father reads her one of the writer’s tales about a sundered friendship between a child and an old man. Meanwhile, the writer presents the original encounter as an open-ended story to a class of fifth-graders, and their sometimes poignant suggestions about what happens next prompt thoughts about how authors must sometimes be ruthless, even cruel in serving the demands of their work. But the revelation that the real friendship that inspired the other, embedded story took a different and happier course prompts the writer to make good on her promise at last—and even, in a fence-mending sacrifice, to destroy her manuscript.

Short and simply told, but hard to follow and likely to have less meaning to children than to reflective older readers with authorial ambitions of their own.