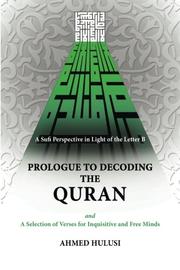 PROLOGUE TO DECODING THE QURAN

A short introduction to the author’s interpretation of the Muslim holy book, the Quran.

The author has written a number of other books on “decoding” the Quran’s meaning. Here he presents a brief overview of his theory, centered on his understanding of the meaning of the letter “B” as used in the Quran’s text. In his interpretation, Allah is seen not as a distinct entity but rather part of everything—an idea drawn from the Muslim mystic tradition of Sufism, which the author practices. Hulusi emphasizes the Quran’s metaphorical nature, and he blames the proliferation of sects within Islam on the tendency of some scholars to read those metaphors literally—as rules rather than frameworks for understanding esoteric concepts. For example, he writes that a verse commonly interpreted as permitting multiple wives in fact refers not to spouses but to “connected souls.” All the Quranic verses here are rendered in English, but the author asserts that the text can only be correctly interpreted in the original Arabic, where it is free from misunderstandings and inaccuracies contributed by translators. After several introductory essays, he includes a list of all the Quranic names for God, with explanations of the meanings of each, and a selection of verses from the Quran. The author’s passion for his subject is evident, and not only because of his frequent use of exclamation points. He tries hard to render a complex topic understandable to laypeople, and largely succeeds, although it may still be difficult for readers to make sense of some of the interpretations. Overall, the book is likely to appeal to those interested in ideas about the Quran and Islam that fall outside of the mainstream.

An intriguing overview of a unique approach to reading the Quran.