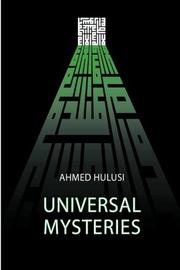 A man in search of answers about life and the universe is visited by an otherworldly being in this novel influenced by Sufism.

Jem, a philosophy teacher, has spent his whole life on a quest for answers. Studying different schools of philosophy and religious teachings, he was always dissatisfied with the so-called answers they offered. Late one night, there’s a knock on the door. Alph, an advanced being with no body, has come to complete his training by studying a human on Earth. The two, along with Jem’s wife, enter into a discourse on the essence of what it means to be human and discuss the great mysteries of the universe. Hulusi uses his novel as a vehicle to explore his own interpretations of Sufism, which mixes traditional concepts with scientific theories. He focuses on teaching his understanding of Sufism rather than constructing a full narrative; the novel has little plot besides the ten visits Alph pays to Jem, who serves as a surrogate for the reader as he embarks on a philosophical journey. As he is challenged by Alph to ponder complex, difficult ideas, so is the reader. At the heart of the novel is the notion that one must escape the earthly body and mind in order to connect to, and be a part of, the universal cosmic consciousness. Controversially, Hulusi posits that there is no one God, but a Universal Intellect that, in essence, we all are a part of. Through the lens of Sufism, concepts such as death and creation, heaven and hell are explored. The author expounds on the idea that one must be open to new knowledge and challenge accepted beliefs. In the end, Alph leaves Jem with more questions than answers. Hulusi’s prose is filled with complex terms and ideas and sometimes reads like a textbook. But his knowledge and understanding of Sufism is thorough and unique.

A deeply philosophical novel that uses Sufism to examine the nature of humanity and the universe.