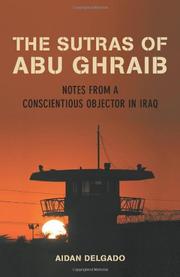 THE SUTRAS OF ABU GHRAIB

Notes From a Conscientious Objector in Iraq

A veteran who was honorably discharged as a conscientious objector lays out a case against the Iraq war.

After a peripatetic childhood as the son of an American diplomat in Thailand, Senegal and Egypt, the introverted and inherently contrarian Delgado moved with his parents to Florida. He attended college briefly, but dropped out to join the Army Reserves as a way of spiting the pseudo-intellectual elitism he found on campus. Waiting to be called to active duty, he finally cracked open some assigned reading on Buddhism and in one sitting decided, “I’ve been a Buddhist for a long time.” Deployed to Iraq, Delgado eventually concluded that a vegetarian Buddhist could not be a U.S. soldier. An impressive combination of research, relentlessness and steadfastness won him a conscientious-objector discharge. While the cynical or jingoistic may read self-justification into his account of the war, Delgado’s portrait of a morally unmoored military is peppered with anecdotes about anti-Muslim sentiment and casual violence against civilians that ring true. A lack of exposure to other cultures and languages renders American soldiers unable to recognize our shared humanity, he argues. Combined with a military culture that encourages viewing all Arabs as enemies and provides neither adequate supervision nor proper preparation, this blindness makes horrors like Abu Ghraib inevitable. Delgado’s points are effective. However, his inward-looking narrative only fitfully conveys a wider sense of the war. It’s also confusing: The author uneasily juxtaposes you-are-here action scenes with flashbacks of seeing monks in Thailand, memories of his girlfriend, explanations of Buddhist philosophy, descriptions of friends from the motor pool and a rough guide to filing conscientious objector paperwork.

Delgado brings an intriguing perspective to a complicated situation, but these notes could use polishing.