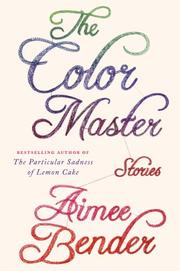 Stories that range from fairy tales to quasi-erotica, all showing Bender’s versatility as an author.

“Appleless” starts us out with an allegorical tale of a girl who refuses to eat apples, a lack of appetite that makes her suspect in an apple-eating world. She eventually inspires such suspicion that she’s assaulted by a pack of apple eaters, and in response, the orchard withers. (One startling and disconcerting note in this story is that the narrator identifies as one of the pack of attackers.) The titular story also verges on fairy tale. In it, the Color Master is consulted whenever a dyeing job of particular importance is needed—the duke’s shoes, for example. One day, the narrator, a lowly apprentice, gets a request for a dress the color of the moon, a task made more challenging because the Color Master has become ill. Bender mines a more sensual vein in stories like “The Red Ribbon,” in which a woman spices up intimacy with her husband by insisting on being paid for sex (this after hearing her husband recount an incident about his college roommate once bringing in prostitutes). Her entire marriage then starts to work on the basis of quid pro quo, even down to washing the dishes. “On a Saturday Afternoon” involves the narrator’s indulgence in a sexual fantasy in which she invites two male friends to come to her apartment so she can get turned on by watching them kiss.

Bender’s gifts as an author are prodigious, and with each story, she moves the reader in surprising, not to say startling, ways.