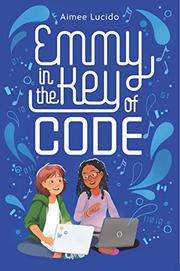 EMMY IN THE KEY OF CODE

A 12-year-old whose dreams of musicianship are shattered discovers a passion for code.

Emmy’s lonely at her new San Francisco school. When her pianist dad got a dream job at the symphony, the family moved from Wisconsin—her mom’s opera career is portable—but Emmy’s miserable. Devastated she doesn’t have the talent to follow in her parents’ footsteps, she ends up in computer club instead of choir. And it’s there, learning Java, that Emmy makes friends with Abigail—and discovers that coding gives her a joy she’d believed came only from music. Free-verse chapters are conventional at first, drawing poetic structures from musical metaphors. But as Emmy learns Java, the language and structure of programming seep into her poems. Music and code interweave (one poem presents Emmy and Abigail’s pair-programming as a musical duet). Typeface changes have myriad effects: showcasing software and musical terms, mirroring the way formatting helps programmers understand software, and reflecting Emmy’s emotional state. As she becomes more comfortable in her own skin, she grows aware of the many traumas that affect her family, classmates, and teachers, and readers will cheer to see them work collectively—like an orchestra or like software developers—to create something beautiful. Characters’ races are unspecified, but on the cover Emmy presents white and Abigail (whose braids are referred to repeatedly) as black.