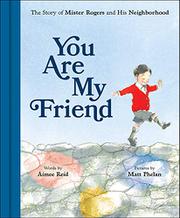 YOU ARE MY FRIEND

The Story of Mister Rogers and His Neighborhood

Using straightforward words and a deliberate pace that emulate the tone of Fred Rogers himself, Reid chronicles the story of this extraordinary childhood icon.

“You are important. You are valuable. You are enough—just as you are.” Freddie, as he was known as a child, spent quite a bit of time inside due to illness. Lonely, he turned to his puppets for comfort and entertainment, foreshadowing Daniel Tiger, Henrietta Pussycat, and other well-known characters who would later appear in Make-Believe. Fred’s grandfather McFeely taught him to believe in himself, to trust that he was special. Fred learned how to handle difficult emotions by playing piano music that evoked how he felt in the moment. His mother played an important part, too, encouraging him to look for helpers around him. So many of these early strategies and philosophies would later form the ethos of the Emmy Award–winning Mister Rogers’ Neighborhood, which ran for 895 episodes on PBS. Phelan’s watercolor illustrations perfectly capture, through vivid colors, the rainbow of emotions that Freddie experienced. Phelan also employs both classic vignettes and graphic-novel elements, offering a unique portrayal of this remarkable individual. In one later image, he surrounds the sweater-clad white man with diverse children, including one who uses a wheelchair. Poignant notes from the author and illustrator explain the purpose, vision, and heart behind this book.