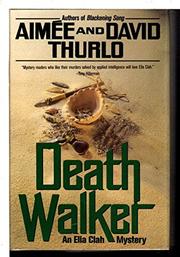 Someone seems to be mounting a full frontal assault on the elders and sages on Ella Clah's Navajo reservation. The most striking piece of physical evidence in old Kee Dodge's murder, a carefully planted cat's bone, implicates the skinwalker magicians who bedeviled Ella's first case (Blackening Song, 1995); the second victim, Leonard Haske, is linked to the hataalii, the Singers of sacred wisdom. But long before the third murder, Ella's convinced she's dealing with a single obsessive killer she dubs the Packrat for the souvenirs he removes from his victims. Despite the obvious leads—a married man involved with Kee's daughter, and a claim of responsibility by Peterson Yazzie, the sergeant who preceded her in the tribal police before he went around the bend and was immured in the Hilltop Psychiatric Institute—she searches tirelessly for the links among the victims and their executioner. That's a lot of thankless searching, because the list of suspects is as vast as it is nondescript. Even Peterson Yazzie, whose predilection for deadly mind games makes him easily the most compelling figure here, is no Hannibal Lecter; once he's escaped and begun his campaign of terror, you may find you've forgotten about him in the underbrush of all those other subplots. Busy, ambitious, and dense, but without the kinds of dramatic and psychological contouring that would make it all memorable.