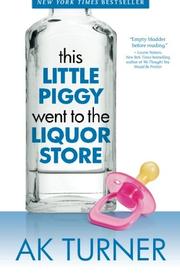 THIS LITTLE PIGGY WENT TO THE LIQUOR STORE

In her first solo work, Turner (co-author: Drinking With Dead Women Writers, 2012) shares a series of essays on being normal—where normal involves copious amounts of alcohol, dreams of becoming a secret agent, and the sometimes-gratuitous use of the word “bitch.”

Turner’s story starts with a glancing look at a birth family that’s broken, swapped or blended, depending on how you define the three. She grows up to glory in her own imperfections. This makes for a likable, sometimes startling, read except when traces of overwrought language—like “only in movies had we caught sight of this medical unicorn called the ultrasound”—distract from the core plot: An unusually honest woman navigating a world that’s not always sure how to respond to her. Turner endures a Caesarean section and a vaginal birth, strips in public (sort of) and admits to faking a Russian accent to buy booze as a teen (it worked). Every once in awhile, a comment—like her husband’s appreciation for the painkillers she received after birthing her children—makes you wonder whether the statute of limitations applies. At other times, Turner seems flat-out angry; perhaps she’s forgotten the point she wanted to make when she writes about problem girls: “Everyone present can see that the princess is a little bitch, with the exception of the little bitch’s parents, because they are bitches themselves.” When Turner does hit the right note, she’s gut-bustingly hilarious, like when she describes the aftermath of an encounter with recreational drugs gone wrong: “I need cleaning supplies, all of them.” But the near-complete lack of detail about Turner’s childhood and relationship with her husband, whose only appearances are as the straight foil to her zaniness, leaves readers wishing she’d turn her engaging honesty on her interior motivation instead of just her exterior antics.

When this sometimes superficial collection hits, which it does more than it misses, it’s very funny.