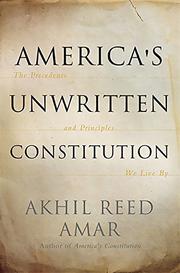 The Precedents and Principles We Live By

At a mere 8,000 words, the Constitution can only sketch basic rules for governing America. This hasn’t prevented a large group—which includes a few Supreme Court judges—from insisting that it contains within itself a perfect and unchanging legal system. Amar (Law and Political Science/Yale Univ.; America’s Constitution: A Biography, 2005) disagrees, laying out his argument in case-by-case details that are scholarly and legalistic but always readable. He emphasizes that much of our unwritten Constitution is written—Supreme Court opinions, presidential proclamations, congressional acts—but that it also encompasses common sense and legal scholarship that aims to decipher a document that contains no instructions on how to interpret its many general statements. Thus, almost everyone believes that the Constitution prohibits anyone in government from limiting freedom of speech, religion and assembly. In fact, the first amendment only prohibits Congress. From the beginning, it was implicit (a terrible word to strict constructionists) that the president, courts and state governments do not get a free pass, but the written Constitution is silent. The Constitution designates the vice-president as president of the Senate: its presiding officer. If impeached, the vice-president could preside over the Senate as it tries his case, acting as both judge and defendant. This is not only absurd, but legal tradition forbids it. If it happened, the Senate would change the arrangements, but the Constitution is no help.

A dense but ingenious mixture of history, legal anecdotes and hypothetical cases.