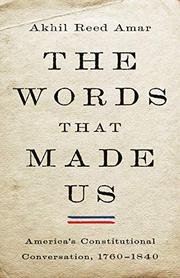 THE WORDS THAT MADE US

A page-turning doorstop history of how early American courts and politicians interpreted the Constitution.

A Yale professor of law and political science, Amar has written numerous books on constitutional matters. In his latest excellent analysis, the author emphasizes that Americans debated the nature of government for 30 years before the Constitution’s approval in 1788, and much of this occurred in courtrooms. Scholars have not ignored this or what followed, but Amar—who points out that most historians lack training in law and most lawyers are not knowledgeable enough about history—delivers a fascinating, often jolting interpretation. Perhaps most ingeniously, he asks, who is “the father of the constitution?” The traditional answer is James Madison, who participated in the major debates, kept the best records, and worked tirelessly for ratification. However, few of his ideas survived the debates, and others were attributed to him in error. Amar leans toward Washington, who “uniquely…got everything he wanted.” The Constitution’s most “distinctive feature,” its “breathtakingly strong chief executive…owed more to Washington alone than to all the other delegates combined.” Ranking other Founding Fathers, Amar places Hamilton second. A brilliant legal mind, he converted the Constitution’s sketchy articles into the strong executive that Washington envisioned. Adams and Jefferson fare badly. Both were absent from the Philadelphia convention, and Jefferson was never more than lukewarm about the results. Madison also comes up short. His conception of the Constitution never envisioned a powerful executive, and once he saw this happening, he turned against Washington, “partly to save his own political skin back in Virginia, partly because he was a policy lightweight on certain big issues (including banks, trade, and national defense), and partly because he was smitten by Jefferson.” Amar gives high marks to Chief Justice John Marshall, but his discussion of Andrew Jackson is unlikely to rescue that president’s plummeting reputation. Focusing on the Constitution, he emphasizes Jackson’s fierce opposition to the concept of state sovereignty promoted by John C. Calhoun, which permitted nullification and perhaps even secession.