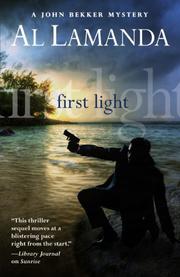 A broken life barely healed is put to a stern test.

John Bekker was a promising police detective when his wife was raped and murdered in front of their young daughter, Regan. Badly traumatized, Regan spent years in a special home; Bekker found his solace in the bottom of a bottle. Now Bekker is about to marry his sister-in-law, Janet, a nurse with whom a vastly improved teenage Regan is living. Solving his wife’s murder (Sunset, 2012) put Bekker on the road to recovery. Though Janet hates the dangers of his life as a private eye, she asks him to take on a case for Dr. Robert Gordon, a hospital administrator who was still in medical school when his wife died in childbirth and his uncle, a sleazy attorney, helped him sell his newborn daughter to a childless New York couple. Now that Gordon’s dying of cancer, he wants the girl found so he can leave her part of his fortune. Bekker has little trouble finding the Gertz family, who raised Sarah with love. But after graduating from college, the bright young woman vanished from her job in Washington, D.C. With the help of his former partner and an old friend in the FBI, Bekker comes up with the idea that Oliver Koch, a powerful senator from Maine, had Sarah killed. Under pressure, Koch’s devoted assistant, Chad Handler, admits that Sarah was pregnant with Koch’s child and refused to have an abortion but denies that Koch had her murdered. When a professional assassin attacks Bekker and severely beats Janet, he kills the assailant. Despite the dangers of bucking a powerful man and the moral ambiguities involved in protecting his family, Bekker refuses to back down.

A sterling thriller whose flawed protagonist consistently evokes sympathy despite the repugnance of some of his acts.