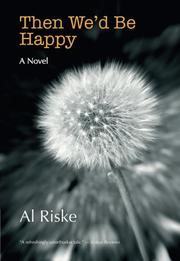 THEN WE'D BE HAPPY

In this brief novel, a group of young friends in California struggle to make ends meet and manage their loneliness.

Luke is a college graduate who sometimes looks for a job teaching English, but for the most part, he meanders through life shiftlessly in El Camino Real. At the beginning of the story, he holds a low-paying job at a woodworking plant, but after he’s laid off, he follows the lead of his friend, Spencer, an aspiring chef, and picks up another low-paying position at a high-end restaurant. Luke’s girlfriend, Tanya, breaks up with him, kicks him out of the house, and later gets engaged to another man, dashing Luke’s hopes for a reunion. After a stint living with his parents, he rents a room in a Sunnyvale house with Marty and Spencer. Luke flirts easily and often with his friend Nita and forms a bond with her daughter, Kayla, but he’s uncertain whether a budding romance with Nita has a future. Meanwhile, Spencer’s girlfriend, Naomi, is serially unfaithful to him and obsessively flirts with other men, including Luke. Marty moves in with a new friend, Fredson, who turns out to be involved in the drug trade, and the police find a connection between him and Ben, Nita’s good-for-nothing ex-boyfriend and Kayla’s biological father. Author Riske (The Possibility of Snow, 2015, etc.) tells the story entirely from Luke’s perspective, relating it in the first person and in a somewhat impressionistic style; many of the chapters are little more than a few paragraphs delivering quirky observations or a poem. Overall, the author deftly captures the tension in Luke between a sanguine aimlessness and the deeper desire for a more purposeful life. The prose is delightfully eccentric at times (one chapter, entitled “Chump City,” contains only a single line: “I am the mayor of Chump City”), but Riske manages to weave a coherent narrative out of the novel’s sometimes-disjointed parts. That said, with the exception of Luke and Nita, the characters are often underdeveloped—more types than persons.