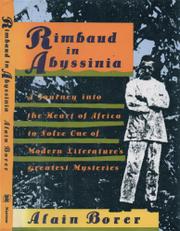 By age 20, when he mysteriously renounced his poetic career without publishing a single volume, Rimbaud had created a body of poetry that many still consider perfect; at age 27, after a brief life of wandering in Europe, he went to North Africa, where he amassed a small fortune in trading guns and coffee. At the same age, though a century later, Borer, a French Rimbaud specialist, accompanied by a TV crew filming a documentary of Rimbaud's last ten years, followed Rimbaud's footsteps—producing along with the film this fascinating, bewildering, and innovative study. Joining the great array of ``Rimbaudians,'' as Borer calls them—the many writers, from the poet's own sister to Enid Starkie and Henry Miller, whom Rimbaud inspired—Borer explores the puzzles and eccentricities of Rimbaud: his fascination with evil; his sensuality; his iconoclasm and rage; his experiments with drugs, love, religion; his restlessness; his crimes—he had a police record in every country he visited and provoked Paul Verlaine, his lover whom he tortured with knives, into shooting him. Despising convention, courtesy, morality (``a weakness of the brain''), glorifying evil and excess, Rimbaud became a permanent symbol of adolescent rebellion before literally escaping from his own identity as the ``visionary'' that he described in the one book he published during his life, an autobiography of his own mind called A Season in Hell. Borer searches for the vestiges of this identity in the adventurer-entrepreneur Rimbaud became—and, in the process, finds the poet in himself. An odd combination of Rimbaud himself, his words and his experiments with form, and the assertive, fragmentary style of the TV documentary on which the book is based—a very challenging read for those uninitiated in Rimbaud and ``Rimbaudrary.'' The translation must have been a trial: What to make of ``his bulimia for reading remained unsated''?