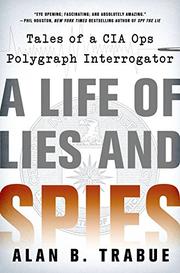 A LIFE OF LIES AND SPIES

by Alan B. Trabue

Memoir from a veteran of the arcane specialty of covert polygraph espionage interrogations.

A second-generation CIA officer, Trabue served from 1971 to 2011, directing both the covert-ops polygraph program and the CIA Polygraph School. His longevity seems attributable to his restrained persona. As he emphasizes, he is no James Bond, averring instead that "the threat of arrest and incarceration was real…the gentleman's game of espionage was really an extremely serious enterprise." Yet, he was drawn to covert examinations for the chance to travel abroad, satisfying the wanderlust remaining from his years as an "Agency Brat," noting, “a childhood filled with foreign travel made me attractive to Polygraph Section management.” Trabue's identification with the agency results in a circumspect account, even by genre standards. He steadfastly avoids identifying a single actual city or real-world case, relying on such obfuscations as “one of my favorite South American locations…a favorite for most visiting polygraph examiners.” He credits the previous generation of Cold War veterans for instilling in him rigorous respect for operational security, given that covert examination involves secretly bringing together the traveling examiner, the CIA case officer, the asset, and a 25-pound polygraph machine in safe houses in often hostile environments. Much of the text explores this basic challenge with anecdotal narratives, which become repetitive, although Trabue’s presentation of tradecraft, such as avoiding surveillance or utilizing hotels discreetly, feels authentic. Instead of historical narrative, the author focuses more on the psychological implications of his trade’s intricate probing of the human condition: "Whatever illegal activity people can do has been discussed during CIA polygraph tests." He emphasizes that his interrogations veered far from heavy-handed noir cliches: "The goal was always to snatch the information out of the examinee's back pocket without his knowledge through the use of persuasive and rational arguments."

An avuncular account of a life spent uncovering deception for the CIA.