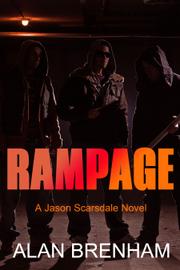 In Brenham’s (Cornered, 2014, etc.) latest thriller, cops in Austin, Texas, face off against a former convict on a vengeance-driven, murderous crime spree.

The murder of a video arcade owner isn’t a simple robbery gone wrong. Mad Dog, fresh out of prison and with the help of thuggish cohorts Rastaman and Runt, is offing witnesses responsible for his old cellmate Snake’s incarceration. Detective Jason Scarsdale and new partner Tatum Harper link the murders thanks to Mad Dog’s snakelike symbols carved on the victims’ faces. As Scarsdale inches closer to identifying the criminals, Mad Dog’s paranoia intensifies, as he suspects a snitch in the mix. Meanwhile, the detective and his 7-year-old daughter, Shannon, are caught in the line of fire when someone takes shots at their home. But there may be more than one person who wants Scarsdale dead. Despite the author’s choice to expose the villains’ perspectives, Brenham still injects some mystery into the plot. The real names of Mad Dog’s henchmen, for example, are initially unknown, so readers aren’t sure when Scarsdale and Harper are questioning a guilty party. There’s likewise a baddie included who may have ties to one of Scarsdale’s previous cases and a preceding book, Price of Justice (2013). The story relies mostly on a solid amount of suspense; the cops are fairly certain who the killers are before the halfway point, and their lives may be in danger when Scarsdale gets to be too much of a “real pain in the ass” for Mad Dog. Outside the investigation, Brenham keeps things lively and constantly moving with surprisingly strong drama. Possible stirrings between the partners, for one, are impossible to ignore: Scarsdale’s long-distance girlfriend, Dani, is apparently angry over his boss’s demand that he stay on the case and forgo plans for a Germany visit, while Harper’s jealous ex-hubby, Preston, simply assumes that the two partners are having sex. Even Mad Dog gets in on the melodramatic action when he’s worried that girlfriend Maggie has run off and either Rastaman or Runt is hiding her somewhere. Brenham rounds out the novel with a car chase, a kidnapping or two, and more than one murder that has less to do with retribution for Snake and more with an increasingly unhinged Mad Dog.

Precise and unequivocally gripping; an edge-of-your-seat ride from beginning to end.