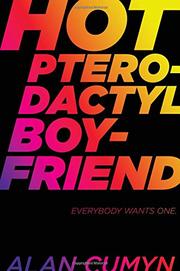 He’s hot. He’s in a band. Every girl wants him. He has claws, wings, and a beak. He can also fly. When Pyke, the school’s first interspecies transfer student, walks through the doors of Vista View High, student-body chair Shiels, who normally has it all together, goes bonkers (a mild understatement). Pyke’s appearance invigorates everyone. He can catch a spiraling football pass like no one else. He can turn a school dance party into a whirling, orgiastic riot. He can turn Shiels’ nose the same tone of purple as his skin with some bump-and-grind dance moves. He can also make her question everything she has ever stood for. Cumyn’s latest (Tilt, 2011, etc.) is certainly good fun, full of fresh new devices (to say the least). However, not only is it hard to swallow, it’s also long-winded. Clocking in at over 400 pages, the plot twists and turns and expands over and over until it completely tries the most patient readers, whose willingness to suspend their disbelief for a story this ridiculous might lapse after the first 250 or so pages. That said, the book is full of hilarious one-liners, straight-on characterizations, some hot sexual tension, and a doofus, headstrong heroine who is all a-flutter and dead set on protecting her prehistoric honey. That makes up for a lot.