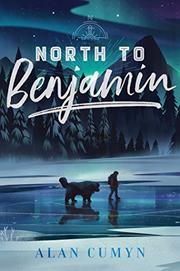 After he moves to Dawson, Yukon, with Stephanie, his troubled mother, Edgar bonds with an elderly dog and remakes his connection to the world.

When they broke up, Stephanie’s ex gave Edgar a camera. Hours into their Dawson housesitting gig, she’s flirting with their new neighbor Ceese, while his friendly daughter, Caroline, introduces Edgar to Benjamin, an infirm Newfoundland, age 14. Living with an unstable, alcoholic parent has made Edgar both passive and fearfully observant. He’s seen her use her looks and charisma to attract the partnered men she fancies before she flees with Edgar to start over. Edgar, almost 12, is determined to keep her from claiming Ceese, whose long-standing girlfriend he admires. Drawn to the Yukon’s icy, implacable beauty—and immersed in Benjamin’s smelly but endearing reality—Edgar identifies with the dog in Jack London’s iconic story “To Build a Fire.” As Benjamin speaks to him, then understands him, Edgar’s words sound like barking to humans though he still writes in English. With heightened senses and his camera he tracks his out-of-control mother, whom he sees as a predator, and makes desperate efforts to warn the preyed upon. Cumyn deliberately builds this memorable world, easing readers into their suspension of disbelief as Edgar’s engagement with Benjamin grows. Far from a mere survival tale, this is a psychological thriller for sophisticated middle-grade readers. Edgar and his mother present white; Ceese and Caroline have brown skin.

This gripping, suspenseful read with compelling characters and a spellbinding setting lures readers into the deep-cold night even as they long for a life-affirming sunrise.