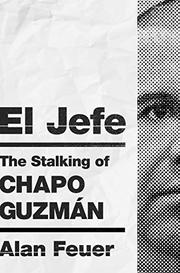 The Stalking of Chapo Guzmán

Fast-paced tale of the decadeslong quest to capture a notorious drug kingpin.

Joaquín Guzmán, aka El Chapo, was just one of many crime lords in Mexico to fall under the scrutiny of American authorities back in the 1980s. By 2006, he was the head of a cartel, at war with other drug clans and the Mexican government. At this point, writes Feuer, who covers courts and criminal justice for the New York Times, Guzmán had earned “full folkloric status,” having escaped from one of the country’s most secure prisons after bribing his jailers. He was on the loose for a decade after, hiding out in the Sierra Madre, where he enjoyed some of the best technology on the market, including a private cellphone network, phones so well encrypted that the FBI’s best technicians could not crack them, and, later, wireless repeaters that enabled his commandos to communicate in the forested country around Guadalajara. Technology is at the beginning and the end of Feuer’s well-documented, only occasionally clichéd account, which includes an up-close portrait of the hacker who built Guzmán’s systems. Through networks and tools of their own, including simulators that “send out signals that mimic those given off by cell towers and essentially suck up locational data from cell phones being targeted,” American drug enforcement agents and Mexican officials alike were eventually able to track him down. Feuer builds a taut narrative of the cat-and-mouse game that found Guzmán at one safe house here, another there, somehow always able to escape even the vaunted Mexican marines. The author sometimes can’t resist the arid, hard-boiled conventions of true crime—“If he was going to hide up there living on tortillas, they were going to make damn sure that he didn’t get beans”—but he knows how to spin a tale.