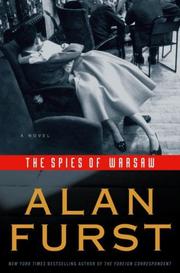 THE SPIES OF WARSAW

As the Nazis openly plan an invasion, France’s military attaché in Warsaw does a little spying, eats good meals, travels a bit and spends time in pleasant surroundings with a lovely lawyer for the League of Nations.

Wounded in the Great War, Col. Jean-François Mercier is a widower with two grown daughters, a vast Parisian apartment, a handsome, slightly shabby country estate and two fine hunting dogs. His current assignment in Poland has him mixing with the local swells—where he picks up bits of information on the tennis court and at dinners—and running a modestly successful intelligence operation involving Herr Uhl, a plump German engineer who swaps details of the Nazis new tank for nights of love with a zaftig “Countess” in Mercier’s employ. From the various little bits of information Mercier has gleaned, it becomes depressingly evident that the Nazis are beefing up their tank warfare capability with an eye on the Ardennes forest, the quickest way around the “impregnable” Maginot Line in which France’s thick-headed military leaders have placed their total trust. Then the Uhl operation falls apart. An obedient hausfrau sharing his train compartment reports Uhl’s nervous behavior to the authorities, resulting in his nearly successful kidnapping by some overeager intelligence agents. Mercier’s successful intervention in the snatch earns him a place on the Nazi hit list. Undaunted, the suave Frenchman plans a fake hike on the German border to photograph the latest tank war games, obtaining even more evidence of the Huns’ strategy, which will yet again be ignored by the dinosaurs at the top of the French army. Offsetting the frustrations at work is a dalliance with beautiful Anna Szarbek, his blind date at an embassy dinner.

Furst (The Foreign Correspondent, 2006, etc.) cuts back a bit on the usual tension, but there is all of the wonderfully wistful late-’30s atmosphere that is his specialty.