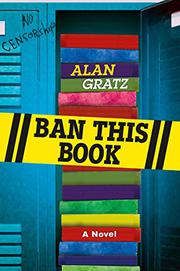 In a tale that is dominated but not overwhelmed by its agenda, Gratz takes Amy Anne, a young black bibliophile, from the devastating discovery that her beloved From the Mixed-up Files of Mrs. Basil E. Frankweiler has been removed from the library at the behest of Mrs. Spencer, a despised classmate’s mom, to a qualified defense of intellectual freedom at a school board meeting: “Nobody has the right to tell you what books you can and can’t read except your parents.” Meanwhile, as more books vanish, Amy Anne sets up a secret lending library of banned titles in her locker—a ploy that eventually gets her briefly suspended by the same unsympathetic principal who fires the school’s doctorate-holding white librarian for defiantly inviting Dav Pilkey in for an author visit. Characters frequently serve as mouthpieces for either side, sometimes deadly serious and other times tongue-in-cheek (“I don’t know about you guys, but ever since I read Wait Till Helen Comes, I’ve been thinking about worshipping Satan”). Indeed, Amy Anne’s narrative is positively laced with real titles that have been banned or challenged and further enticing teasers for them.

Contrived at some points, polemic at others, but a stout defense of the right to read.