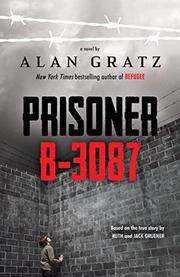 If Anne Frank had been a boy, this is the story her male counterpart might have told. At least, the very beginning of this historical novel reads as such.

It is 1939, and Yanek Gruener is a 10-year old Jew in Kraków when the Nazis invade Poland. His family is forced to live with multiple other families in a tiny apartment as his beloved neighborhood of Podgórze changes from haven to ghetto in a matter of weeks. Readers will be quickly drawn into this first-person account of dwindling freedoms, daily humiliations and heart-wrenching separations from loved ones. Yet as the story darkens, it begs the age-old question of when and how to introduce children to the extremes of human brutality. Based on the true story of the life of Jack Gruener, who remarkably survived not just one, but 10 different concentration camps, this is an extraordinary, memorable and hopeful saga told in unflinching prose. While Gratz’s words and early images are geared for young people, and are less gory than some accounts, Yanek’s later experiences bear a closer resemblance to Elie Wiesel’s Night than more middle-grade offerings, such as Lois Lowry’s Number the Stars. It may well support classroom work with adult review first.

A bone-chilling tale not to be ignored by the universe.