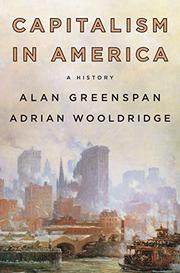 Everyone’s favorite Randian economist explains the rise of American economic supremacy and worries for its passing.

Former Federal Reserve chair Greenspan (The Map and the Territory: Risk, Human Nature, and the Future of Forecasting, 2013, etc.) teams up with Economist political editor Wooldridge (co-author: The Fourth Revolution: The Global Race to Reinvent the State, 2014, etc.) to chronicle the emergence of the United States from economic backwater to powerhouse, with its 5 percent of the world’s population accounting for 25 percent of its GDP. By the authors’ account, this rise has several key components, including diversity, equal opportunity to enter a marketplace with few barriers to entry, and an openness to contribution from just about everyone—the farmer’s son Henry Ford, for instance, who toured the great slaughterhouses of Chicago and marveled at the carcasses moving through the saws and trimmers: “It was during a visit to one of these abattoirs that Henry Ford got the idea of the mass assembly line.” Though of a libertarian bent, Greenspan and Wooldridge seemingly approve of public goods in the form of education, which, among other things, has long allowed the U.S. to be a “talent magnet” for entrepreneurially minded immigrants; now, events inspire them to decry “the current rise of nativism and populism.” Rather more predictably, the authors lament the rise of regulation. “In the 1930s," they write, “Americans turned to government to save them from the instability of the market. In the 1980s, they turned to entrepreneurs to save them from the suffocation of government." The current regulation-heavy environment, coupled with lack of innovation and misguided efforts to place barriers on free trade, may lead to the emergence of rivals better attuned to the global market. Meanwhile, the authors foresee the beginnings of stagflation and the eventual economic decline of the once peerless U.S. market.

Not without biases, but a smart and engaging look at the workings of the economic machine under various regimes, isolationist and internationalist alike.