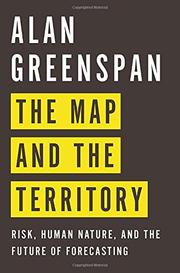 THE MAP AND THE TERRITORY

Risk, Human Nature, and the Future of Forecasting

Former Federal Reserve Board chairman Greenspan (The Age of Turbulence: Adventures in a New World, 2007, etc.) lightens up on free market orthodoxies to ponder the fact that people do not always behave, economically, as we wish them to—and neither do markets.

The author has long espoused a kind of laissez faire–ism that assumes that markets are self-adjusting and guided by the enlightened self-interest of individuals. Even so, Greenspan warned darkly of “over-exuberance” in the market, a polite way of hinting that a bubble was about to burst. The author opens with the admission that, yes, some people behave with less than “rational long-term self-interest” when everyone else is clamoring for the wonders of high-tech and the South Seas. A touch late in the game, he also asserts that, since we know of our irrationality as players in the economic game, we should be able to build this flaw into our economic forecasting models and predict future crashes. Though much of the book is a rather technical discussion—it is the dismal science after all—of things such as risk aversion and time preference, Greenspan scores some important points along the way. We need, he suggests, regulation in the marketplace—just not the kind of regulation we’ve been getting. Further, many of our problems, though of an economic nature, are political and not strictly matters of the exchequer, meaning that political solutions are required if, due to the current political mood in Washington, not likely to be soon forthcoming. On a level both micro and macro, the author also notes that “[o]ne of the most fundamental propositions of economics is that advances in standards of living require savings,” a bit of wisdom that we’ve all been neglecting.

Sober without being dour and with a perhaps surprisingly optimistic conclusion. For policy wonks and readers with a grasp of basic economics, a refreshing re-examination of doctrine, reality and effect.