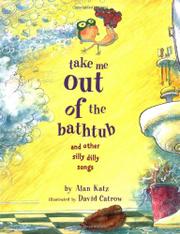 TAKE ME OUT OF THE BATHTUB

and Other Silly Dilly Songs

It’s not that the new lyrics set to old-favorite tunes aren’t humorous in Katz’s book, it’s that they are predictable. There’s the piece on dirty nappies (set to “Twinkle, Twinkle”): “Stinky stinky diaper change / Boy, my brother smells so strange / He made something in his pants / Sure hope it won’t attract ants . . . ” And the piece on vomiting (“Oh, Susanna”): “I’m so carsick / Gotta go wee-wee / Hey Dad, stop this Toyota / And next time, go without me!” And on being grungy (“It’s Raining, It’s Pouring”): “I’m filthy, I’m dirty / Got mud on my shirty.” Time-honored, crowd-pleasing topics, as are the thematic items, like meatloaf (mashed in your hair during a food fight, being prepared in the washing machine) and exasperated parents. But like those nappies, the work here lacks a certain freshness: Cleverness they may have, novelty they haven’t. Catrow’s illustrations are manic in a bug-eyed way, and it has to be handed to him that he hasn’t stooped to the graphic to get chuckles, but keeps things at the suggestive level. (Picture book. 3-6)