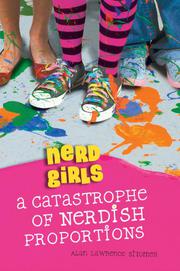 A CATASTROPHE OF NERDISH PROPORTIONS

From the Nerd Girls series, volume 2

Defiantly nerdy and full of spunk, Maureen along with friends Alice and Barbara return in this boisterous sequel.

The feud between Maureen’s group and the trio of “Pretty, Popular, Perfect girls” known as the “ThreePees,” begun in Nerd Girls: The Rise of the Dorkasaurus (2011), continues unabated. The escalating series of pranks they play on each other attracts the attention of the school administration, and the girls are given an ultimatum: compete as a team in the upcoming Academic Septathalon or be suspended. Suddenly, Maureen is the captain of a team comprised of skirmishing factions and preparing for a rigorous academic competition. However, unexpected alliances form as these archenemies struggle to work together. Their captivating drama culminates during the televised contest. Sitomer gives several returning characters greater depth and invigorates a familiar storyline with intriguing subplots. “Allergy Alice,” weary of her mother’s overprotectiveness, embarks on a quest to gain independence, with alarming results. Meanwhile, Maureen’s long-absent father reappears to repair the family relationship—much to Maureen’s consternation. Readers ultimately realize that, regardless of the Septathalon’s outcome or family dramas, the Nerd Girls will prevail due to their steadfast, enduring friendship.