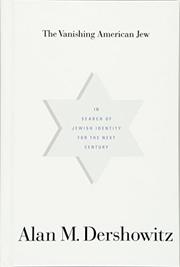 In Search of Jewish Identity for the Next Century

Now that Dershowitz, the noted Harvard Law School professor and celebrity defense attorney, has told American Jews what wusses they are (Chutzpah, 1991), he sets out to tell them how to ensure their community's survival into the 21st century. In the past, he claims, Jewish cohesion and continuity were based on negative qualities: fear of anti-Semitism and a tribal mentality. The younger generation today, however, feels physically secure from persecution and is culturally assimilated—to the point where the survival of American Jewry is threatened more by this internal danger than external ones. Hardly original and a bit superficial as analysis, but the real devil is in the details of his case. One could point to Dershowitz's self-aggrandizing inaccuracies, such as his pretension of putting in the open a topic (assimilation) that has been only ``whispered'' about, while in fact it has been a primary concern of the Jewish community since the release of the 1990 National Jewish Population Survey. Dershowitz relies on its statistics to project a dismal future if American Jews don't follow his proposals. The study's statistics, however, are hotly debated by scholars. Dershowitz's solution? Let a thousand Judaisms bloom: ``There is no one substantive essence to Judaism,'' he argues dubiously. Thus, young people need not be turned off by any one view of Judaism; they're all equally valid. He begs the question, of course, of what Judaism becomes when it is so broadly defined as ``a Judaism of ideas, of attitudes, of skepticism, of justice, of compassion, of argumentation, and of inclusiveness'' rather than as a set of specific beliefs and a code of action. Dershowitz is right to emphasize the need for good, intensive Jewish education, and he is convincing in his description of the importance Judaism plays in his own life. But he's not convincing in the idea that a Judaism in which everyone can have it any which way they want is a Judaism that will have lasting power in the century to come. (Author tour; TV/radio satellite tour)