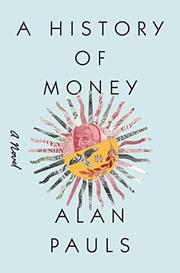 A HISTORY OF MONEY

A man recalls his past through the filter of money—often ill-gotten or badly spent—in this inventive if tangled tale.

The protagonist of this second translated novel by Argentine writer Pauls (The Past, 2003) opens his story at age 14, when he witnessed the funeral of a captain of industry who died in a helicopter crash under mysterious circumstances. The man was a family friend, but the narrator here and elsewhere isn’t interested so much in intimacies and relationships as financial connections: as he drills deeper into his past, he ponders the dead man’s attaché case full of cash, his father’s lifelong gambling habit, his mother’s ineptitude with money, and his own bad investment in a money pit. “Ponder” is the operative term here: Pauls writes in a recursive style built on long sentences with subclauses that aspire to Jamesian girth and gravitas. Credit Pauls for a rhetorical command that keeps these sentences from collapsing (and translator Robins for successfully preserving their integrity). At its best, the strategy conveys the gnarled and interior mental state that such financial fixation produces (in the early sections, the protagonist obsesses over the dead man’s irritating crostini-crunching); at its worst, and too often, it’s simply digressive, overexpanded navel-gazing. That’s all the more frustrating because buried under Pauls’ thickets of prose is a pointed commentary on the fragility of money and the oppressive Argentine politics of the 1960s and '70s. And Pauls can sensitively render the way money both bound and disconnected the novel's hero from his divorced parents. But when it comes time to bring the story to a strong emotional finish, the impact of the climax is overwhelmed by the sheer weight of the prose; though short as a novella, it’s dense as an epic but without the widescreen effects.

A well-intentioned experiment that’s hobbled by its longueurs.