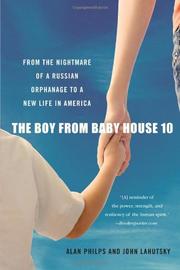 THE BOY FROM BABY HOUSE 10

A Child’s Journey from Heartbreak to Happiness

Aided by British journalist Philps, Lahutsky recounts his experiences in the “children’s gulag,” a Stalinist-era relic that operates to this day. Now a high-school student living with his adoptive mother in Pennsylvania, at the time the book opens Lahutsky was a toddler named Vanya, abandoned by his birth mother and diagnosed with cerebral palsy. He was sent to the titular orphanage, a decrepit human warehouse whose head doctor was a superstitious peasant rather than a medical professional. Children with physical disabilities like Vanya’s were routinely declared mentally retarded by Russian authorities, then consigned to orphanages where therapy was nonexistent. But Baby House 10 was the Taj Mahal compared to the internat (asylum) to which Vanya was later shuttled to spend the rest of his life. A hellhole in which children were sedated and left in steel-barred cribs soiled with their own urine and feces, the internat spurred reporter Philps, his wife and some humane Russian caregivers to make heroic efforts to save Vanya. The book details his tortuous ordeal with the Russian state bureaucracy and an aborted adoption by a British family, as well as his ultimate connection with a loving American mother. None of his setbacks snuffed out Vanya’s indefatigable resilience, which was his salvation and comprises the most remarkable part of his story.

An emotionally draining but haunting document of human cruelty, kindness and survival.