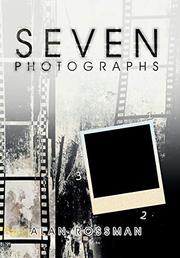 A grieving graphic designer forms a unique bond with a depressed neighbor in Rossman’s debut novel.

It’s been a year and a half since Owen and Janey Conway’s son, Aaron, died. To deal with his grief, Owen has been attending a support group called SOS. He’s also interested in a neighbor named Wilson Lacy, a retired scientist and teacher. Owen barely knows him, but he’s seen him tooling around the neighborhood in his 1950s sports car. Because Owen is sad, he’s drawn to what he senses is Wilson’s sadness, so he approaches his neighbor with a proposal. Owen’s a graphic designer, and he wonders if Wilson might want to take part in a project involving seven photographs, carefully chosen to represent significant points in the neighbor’s lifetime. Wilson, whose wife has recently left him due to his depression, agrees to the plan. “Maybe he was beginning to see something else in his photographs that could be used to shed some light on his darkness—and that glimmer moved him with an amalgam of desperation and hope,” narrates Owen. His plan involves what he calls “visual literacy” (“The idea is that there is meaning engraved in all visual images”), and he presents the project to Wilson as a kind of science experiment. Then Sophie, the hostess at the local pub, enters the picture; Owen introduces her to Wilson without fully realizing the effect that she might have. Rossman’s novel about grief and its aftermath is truly heartfelt in its execution. Over the course of the story, the author clearly describes his protagonist’s complicated thought processes as he wades through grief on the way to acceptance. The characters are all thoughtful people who are clearly interested in finding answers to hard questions, and Rossman elegantly expresses Owen’s efforts to connect with a possibly kindred soul. The novel is long-winded, however, and the dense prose can make some of the book’s loftier concepts a bit hard to grasp. An extensive epilogue with photographs provides helpful insights, but other parts of the story remain hazy.

A perceptive novel about human connection that sometimes gets lost in its own thoughts.