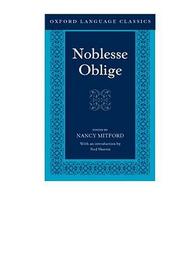 A transatlantic import consists of six pieces, along with an introduction by Russell Lynes, and primarily Nancy Mitford's article The English A which had an aroused and/or amused response, led to more than one tempest in and over the tea cups, and even provoked the cover on Punch with the device Snoblesse Oblige. Miss Mitford's article, which was based in turn on Professor Ross' "essay in sociological linguistics" on (upper class) versus Non-U parlance, widened the inquiry from the unintentional lgarities and unforgivable vulgarisms of speech to a discussion of other manifestations of pedigreed behavior. Evelyn Waugh delivers a teasing rebuke; the anonymous "Strix" has his word to say on Posh Lingo an unfortunate institution "like lorgnettes to be used to outface non-U speakers"; Christopher ykes has his projection of T-speech; and John Betjeman's concluding poem which includes all the tattle tale words of the unfortunate Non-U user in very funny.... The Honble. Mrs. Peter Rodd's (Nancy Mitford) social cartography, her trifling proprieties and prohibitions will not cause more than pause to wonder at this classy bit of class consciousness but she has a certain cachet, as do the other stylish contributors. Those who liked the Stephen Potter books and Russell Lynes' Snobs, will certainly enjoy this.