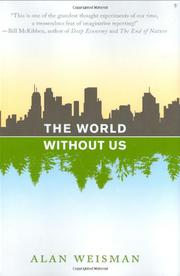 THE WORLD WITHOUT US

Disaster movies have depicted the State of Liberty poking out from the ground and empty cities overgrown with trees and vines, but what would really happen if, for one reason or another, every single one of us vanished from the planet? Building on a Discover magazine article, Weisman (Journalism/Univ. of Arizona; An Echo in My Blood, 1999, etc.) addresses the question. There are no shocks here—nature goes on. But it is unsettling to observe the processes. Drawing on interviews with architects, biologists, engineers, physicists, wildlife managers, archaeologists, extinction experts and many others willing to conjecture, Weisman shows how underground water would destroy city streets, lightning would set fires, moisture and animals would turn temperate-zone suburbs into forests in 500 years and 441 nuclear plants would overheat and burn or melt. “Watch, and maybe learn,” writes the author. Many of his lessons come from past developments, such as the sudden disappearance of the Maya 1,600 years ago and the evolution of animals and humans in Africa. Bridges will fall, subways near fault lines in New York and San Francisco will cave in, glaciers will wipe away much of the built world and scavengers will clean our human bones within a few months. Yet some things will persist after we’re gone: bronze sculptures, Mount Rushmore (about 7.2 millions years, given granite’s erosion rate of one inch every 10,000 years), particles of everything made of plastic, manmade underground malls in Montreal and Moscow. In Hawaii, lacking predators, cows and pigs will rule.

Weisman quietly unfolds his sobering cautionary tale, allowing us to conclude what we may about the balancing act that nature and humans need to maintain to survive.