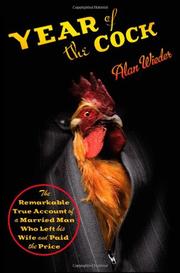 YEAR OF THE COCK

His memoir opens with the author tugging and pulling at himself in what are later revealed to be a series of PE—as he truncates Penis Enhancement—exercises. In February 2005 (the Year of the Rooster on the Chinese calendar), the author left his wife to seek the life of a swinging single. “Los Angeles is of course a town acrawl with sexy young women,” he writes, “even the least desperate of whom I felt confident I could lure home to my tastefully decorated future bachelor pad.” Wieder encountered his first stumbling block when it became clear that his best friend was heading to the altar, and thus would be unavailable as his dedicated wingman. “[A]s off-the-leash and totally committed as I was to getting sloppy laid,” he writes, “I knew how potent our combined mack would be.” Yet he persevered, setting up three dates with three different women over three consecutive nights for his second full weekend of “bachelorhood.” Though Wieder claims to have exhibited genius-level smarts in childhood aptitude testing and occasionally drops references to things like poststructuralist texts, the majority of the narrative is dedicated to celebrating his outright decadence and the “many women [he] hoped and planned to fuck.” Just when he thought he was “so fucking set,” he had an existential crisis, spurred by the Internet release of a sex tape featuring Limp Bizkit frontman Fred Durst. After years of producing shows that humiliated participants for ratings, Wieder—upon hearing Durst’s penis described as small and then comparing sizes—felt an emotion he “couldn’t identify at first” (turned out to be shame). The author then proceeds to describe his pathologically addictive behavior regarding PE.