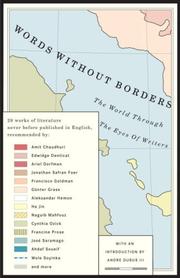 The World Through the Eyes of Writers: An Anthology

Wide-ranging, politically charged collection of 27 narratives from around the globe.

This collection opens with an astonishing fact: “50 percent of all the books in translation now published worldwide are translated from English, but only 6 percent are translated into English.” In conjunction with the well-known ignorance of most Americans about global politics—or even global geography—that statistic is reason enough for this absorbing book. Composed of poems, short stories and excerpts from novels, the anthology gathers the work of writers from Iran, India, China, Korea, Romania, Iraq and Palestine, among others. Each text is introduced by a writer more likely to be known to a U.S. audience, including a handful of relatively well-known ones like Cynthia Ozick and Jonathan Safran Foer, but many more by internationally acclaimed writers like the Nobelists Naguib Mahfouz and Günter Grass. And while this is a rich and impressive anthology, it is also uneven. This is less the fault of the primary text than of the introductions. Many of them strain to describe the qualities of the writer they introduce, lingering over images and themes in abstract, self-involved language. Some show a real flair for identifying the cultural and historical resonance of the writer they’re presenting; those who do this well (Wole Soyinka, for example) drop the reader right into the center of the narrative. The pieces themselves are all gems. Of special note: the wrenching work of Chinese writer Ma Jian; the beautiful prose of Indonesian writer Seno Gumira Ajidarma; and the acute social eye of Iranian writer Goli Taraghi.

Imperfect, but one of the best introductions to non-Western writers there is.