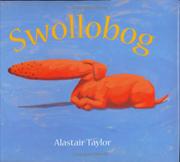 A wry tall tale about a dog that eats everything—and that really means everything. So named because her youthful mistress had a little trouble writing her letters correctly, Swollobog, true to her moniker, has a near-mythic capacity: "Bananas, toast, and peanut brittle are her particular favorites, besides cheese. She also likes carrots, yogurt, pizza, toenail clippings, and door handles. Oh, and blueberry muffins, snails, mud, toothpaste, lemons . . . " Newcomer Taylor's bright gouache illustrations depict a somewhat rotund, never repentant, dachshund-ish dog with a formidable proboscis who clearly relishes eating her way through life. They frequently venture into the surreal, as when a hungry Swollobog engulfs our narrator's dad's leg up to the knee, or when, in the main action of the book, she eats an enormous squiggly helium balloon, assuming its shape and floating out over the sea. A daring rescue at sea ensues, in which Swollobog's desperate family row out after her, flying a kite dangling peanut brittle intended to pop the balloon from the inside when their insatiable dog eats it. The chatty, deadpan narration relies for its effect on the delightfully sly illustrations—and on a highly developed sense of irony in its reader. For those children, especially ones who may have one of Swollobog's cousins at home, this British import will hit the spot. (Picture book. 5-8)