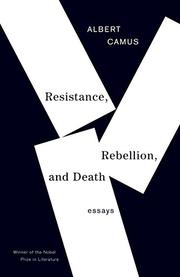 Biographically speaking, there is nothing as definitive concerning a man's life as the asides he speaks- to himself or while facing an audience. Letters and speeches written at the moment and not organized into a timeless work reveal more of a person's life and thought than any rote biography by an admirer. This is precisely what this book is. It does not explain Albert Camus. It reveals him. This is its first value. Here we find Camus' letters written during the war to a German friend, attempting to sift his love for his country despite its weaknesses and insanities. For himself and France Camus has tried to judge his own land and culture, to tap its vital bloodstream, discover its worth, and thus "absurdly" enter the larger family of mankind. For Americans, the book has an added value. Here is a man who speaks our own language, the traditional language of America in constant criticism of itself. And perhaps this explains the reading public's great affinity for this European. Finally the collected asides give us a greater insight into Camus' thinking. He details his war effort and distinguishes his support of killing from that of murdering. He etches his homeland, Algeria, attempting to preserve the familiar relationship of the past and the independence required of the present. Through his love of justice he exerts a forceful resistance against Christianity and Communism, though he respects both. Yet his passionate love of justice becomes quicksand and unveils his deep religious feeling. After all, as Camus says, "The only real artist then is God...all other artists are, ipso facto, unfaithful to reality". A statement in which he included himself. Certainly this is the most important book written about Camus, by one who knows best.