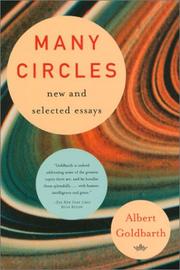 For those who think clearly written prose is for sissies, Goldbarth is back—with a representative essay collection that both dazzles and stupefies with its complications.

Winner of the National Book Critics Circle Award for his poetry, Goldbarth is also an acknowledged innovator of the literary essay, with three collections to his credit (Dark Waves and Light Matter, 1999, etc.). Some of his best-known works appear in this collection, including “After Yitzl” and “Parade March from That Creaturely World” (both of which introduce his preoccupations with the movement of time and memory). All the essays display his trademark mélange of dense poetic phrasing, multiple story lines, historical events, and pop culture—which, for sheer bulk alone, is amazing. But while his knowledge of arcana, language play, and dexterity at interweaving stories (most notably in “Worlds”) may astound, it will also serve to keep readers away. The mounds of facts (whether about Madame Curie or Krazy Kat or Theseus) and overwrought phrases (about food, sex, the galaxy) are too much for the average well-read philistine. Reading through the mass of references and odd locutions on faith (and without a Columbia Encyclopedia at hand) erodes much of the emotional impact of the experience. The result is an admiration of Goldbarth’s work combined with very little enjoyment of it—and a perplexity as to what the point of his writing is in the first place. Is it to show the vastness of the human mind at work and the inability of two randomly meeting minds to connect? If so, why read?

With essays spanning more than 20 years, this collection provides a surefire introduction to Goldbarth’s prose—but the trip may not be much fun the first time around.