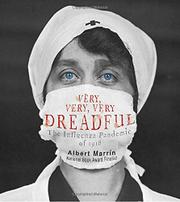 The Influenza Pandemic of 1918

A comprehensive history of the influenza pandemic of 1918, the worst global killer that humankind has experienced.

Historian Marrin (Uprooted, 2016, etc.) begins four years earlier, at the beginning of World War I. Liberally referencing research, partial statistics, diaries, medical records, newspaper articles, art, photographs, poetry, song, and literature, Marrin works to give an accurate depiction of the circumstances and ill-timed incidents that led to the global catastrophe, which killed at least three times as many people as the war worldwide. The author does not neglect the squalor around the globe: ill soldiers in trenches and overcrowded barracks, suffering families, orphaned children, hunger and undernourishment, and deaths so numerous that bodies are stacked upon bodies. Marrin reveals how scientists and doctors knew little about influenza a century ago, as surgeons and physicians didn’t practice routine hygiene or quarantine and were often rendered helpless; in fact, he argues (albeit briefly) that nurses turned out to be most useful against influenza, for they provided supportive care. He then brings the eye-opening narrative to the present, detailing the search for the origins of influenza; recent scientific breakthroughs; the emergence of the H5N1 strain; and how, without intending to, scientists have brought the virus to a risky, imminent pandemic.

Not one to shy away from unnerving details, Marrin relays what researchers and scientist express today: another influenza pandemic will unquestionably strike again.