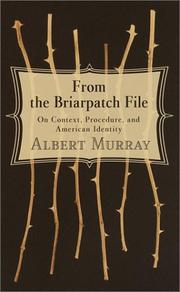 FROM THE BRIARPATCH FILE

On Context, Procedure, and American Identity

Smooth but scrappy essays on the creation of art, universally and with particular attention paid to the circumstances of the African-American experience.

Octogenarian cultural critic Murray (The Seven League Boots, 1996, etc.) is both a keen participant and observer as he deals out his thoughts on the blues, Robert Penn Warren's Who Speaks for the Negro?, New York in the 1920s, the glory of Duke Ellington, among other topics. A rapier intellect keeps these essays quick and nimble, but they leave plenty to chew on in their wake. Murray is especially fascinated by “the matter of processing or stylizing idiomatic folk and pop particulars, which is to say extending, elaborating, and refining folk and pop material up to the level of fine art.” Duke Ellington is one example; he transformed indigenous American raw material into universal art by seizing the “indispensable dynamics of the vernacular imperative.” In parallel, the author notes that writers such as Faulkner (and one might add Murray himself) conjure a sense of place via idiomatic particulars that can be turned as metaphors. To survive, let alone flourish, Murray argues, one has to think fast, be “ready to swing as if he were a competent jazz musician in the ever unpredictable circumstances of a jam session and also always be ready to riff or improvise on the break.” This seems a crucial statement of reality not just for African-Americans, but by extension for anyone living at the turn of the millennium. Especially insightful is a previously published interview (by Sanford Pinsker) in which Murray talks about hearing the jazz in his favorite writers (Kafka, Mann, Auden): “When a sentence sounds right to me, it's probably some variation of the Kansas City 4/4.”

Vital and unsparing. Murray taps the wellspring of greatness and posits it as a challenge for artists-in-the-making.